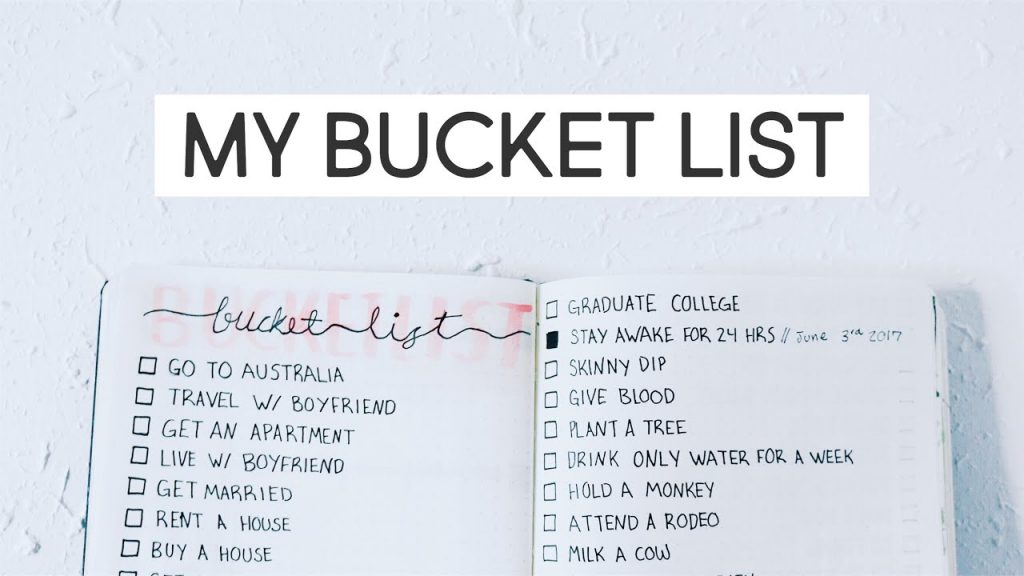 We all have a mental list of things we would like to do in life before we pass away. Writing a ‘bucket list’ brings you one step closer towards making some of these goals a reality, however it can be more difficult than you think to actually put a list together.

We’ve put together our top tips which will not only help you write a list that is meaningful, but actually put it into action.

Starting your list is probably the easy part. The first few things should come quite easily as we all have aspirations and wishes, but forming a list that is going to give you what you want to achieve from life is tricky. Check out what other people have listed online as this might give you some inspiration. You might not necessarily want to do what they have listed, but it could give you some good ideas that you never really thought of.

We’re all fickle deep down, what might interest you now might not be something you feel the same way about later in life. Start small, think of three things you would really like to do but have never had the chance to do, then add to it as and when you think of something. Equally, your life might change in a way that it doesn’t allow for what you’ve listed.

The key here is do what you want to do, not what everyone else is doing. It’s easy to compromise when thinking of things you’d like to see or experience, but think outside the box and consider what is meaningful to you.

If all of your goals are difficult to accomplish you will quickly get discouraged and may not make the progress you’d like. Think of things that can be done with little or no budget that will still mean a lot to you. For example, face a phobia or rekindle an old friendship.

Don’t include anything and everything you can think of, it has to be achievable otherwise you may struggle to tick things off. Finances are probably the biggest worry when it comes to writing and completing your list, but you never know what the future will hold so don’t necessarily discount lavish ideas. The important thing here is to not put too much pressure on yourself.

In 2012, The Guardian interviewed a palliative nurse who had meticulously recorded the biggest regrets of the dying. The nurse had discovered that by far the greatest regret those in the last stages of their lives shared was that they had lived the life expected of them rather than the life they wanted to lead. The second most common regret was working too hard. It is often said that you never regret the times you did something but it always the missed opportunities that haunt the mind the longest. The simple way to avoid this is to look at your list and start ticking things off.

Steven Barrett from R.W. Barrett & Son, a local funeral director based in Newcastle upon Tyne said “If our industry teaches us anything it’s that you can never be sure how long you have. Our advice is go out and do everything you can and want to do, whatever that may be.”